Reklama
Reklama
Reklama
Reklama
Udostępnij na Facebooku
Udostępnij na Twitterze
When the first group of Central European countries joined the EU in 2004, their primary objective was to build strong and stable economies. European economic integration was a means to this end.
Fifteen years after accession, it is clear that the project has been an economic success. According to the International Monetary Fund (IMF), our GDP per capita measured in real purchasing power increased between 2004 and 2021 by more than 60% on average, ranging from more than 31% in Croatia (which, by the way, only joined the EU in 2013) to almost 103% in Lithuania. Over that period, the largest economies of Western Europe “grew richer” by a dozen percent.
Reklama
The credit for this success in part goes to the development of trade. According to Eurostat, Polish exports of goods and services to the EU have risen by 386% since 2004, Lithuanian by 464%, and Estonian by 493%. Exports to non-EU countries have also risen just as fast thanks to investments and increased competitiveness. Over that period, exports from Germany, Europe’s power engine, have grown by “only” 110%. This attests to the scale of economic development in this part of Europe.
For many industries, the countries of our region have become production hubs, not only on a European scale but also worldwide. Increasingly, the ambition of local companies is to expand and create more and more globally relevant brands. This is not possible without close economic cooperation, which requires not only the will to work together and build mutual relations but also the right infrastructure.
Reklama
Over the past 15 years, the countries of the region have made a quantum leap in infrastructure. Thanks to growing domestic capacities and the inflow of EU funds, the density and quality of infrastructure have improved. However, there is still a long way to go. According to a 2019 report released by SpotData in partnership with BGK (spotdata.pl/research/download/74), the investment needs of our region in transport, energy, and digital infrastructure until 2030 amount to more than EUR 530 billion. According to a 2020 IMF report, closing only half of the “infrastructure gap” between our region and Europe’s most developed countries by 2030 requires capex on the order of 3%-8% of GDP per year.
According to the same IMF report, such investment could be more effective if implemented in partnership between the countries of the region. Their governments recognise that need. At the turn of 2016, at successive meetings in New York and Dubrovnik, they established the Three Seas Initiative, which is primarily a political agreement. In 2019, public financial institutions of the region set up the Three Seas Fund, which is a strictly business-oriented financial vehicle. Among other things, the Fund aims to attract global institutional and private investors to support infrastructure investments in the region. Even though it was established relatively recently, the Fund has already attracted its first private investors and made its first investments in all segments of its operations.
Reklama
The outbreak of war in the region does not diminish the importance of the Three Seas project. On the contrary, it has become more important than ever!
The first economic outcome of Russia’s attack on Ukraine, which has affected all European countries, was widespread recognition of the risks of dependence on imports of energy commodities from the aggressor. The imperative to find new suppliers of gas and oil has become a priority in discussions among political and business leaders in the EU.
It is no coincidence that the Baltic States, and later Poland, were among the first to set a date for giving up Russian gas. With their shared historical experience, most countries in the region have for many years considered energy independence from their eastern neighbour a top priority. Projects such as the Croatian and Polish gas ports on Krk Island and in Świnoujście, the Lithuanian gas terminal in Klaipeda, and the Polish Baltic Pipe project are emblematic of this aspiration. The experience gained in these and other investment projects, as well as the infrastructure already in place, can now become crucial for all of Europe.
Regardless of the course and outcome of the war in Ukraine, our region is also gaining importance in other economic sectors. The countries to the west of Ukraine will either have a “frontline” position or will be hubs for the economic and political reconstruction of Ukraine itself, as well as Moldova and possibly Belarus. The quality of economic relations with the countries of the eastern neighbourhood will drive the successful development of their modern market economies. For this endeavour to be successful, enhanced economic cooperation is also indispensable within our region. This is both a major opportunity and an economic and political challenge. We must rise to it together.
opinion 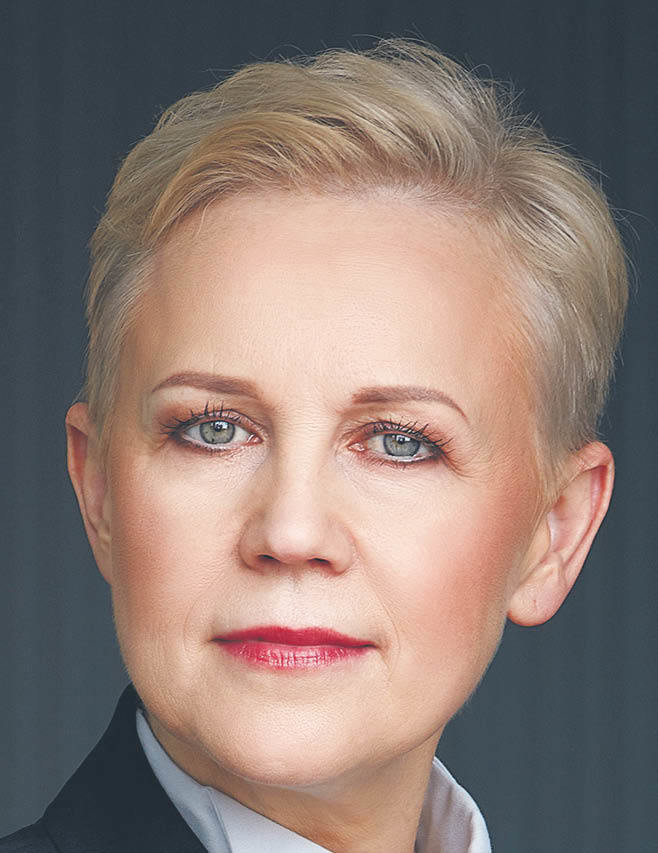 Beata Daszyńska -Muzyczka CEO, BGK, Polish Development Bank / Materiały prasowe
Development banks and similar institutions provide financing for economic or social projects whose value to the economy and society exceeds business value. The strategic role of such banks is particularly evident now that European economies are faced with a crisis triggered first by the pandemic and next by the war across the Poland’s eastern border.
Polish Development Bank, BGK has helped to effectively mitigate the impact of these crises by offering i.a. a range of guarantee, lending and investment programmes. In 2021, we published our new business strategy focused on supporting sustainable social and economic development. The current conditions of the greatest economic challenges of the 21st century prove that our mission is vital and our actions particularly needed. Last year alone, our bank generated over EUR 25 billion in support for the Polish economy. We helped many companies to survive the toughest times and, thanks to many support schemes, protect or create almost half a million jobs.
BGK is a member of a large international family of development institutions. We cooperate on a regular basis and implement joint projects, as amply demonstrated by the Three Seas Fund established in 2019. Working with the largest development banks in Europe, we have recently launched a EUR 2 billion initiative to provide assistance to refugees fleeing war in Ukraine and support the integration of Ukrainian refugees in EU countries.
>> Special edition: World economic forum Davos 2022 <<