Reklama
Reklama
Reklama
Reklama
Udostępnij na Facebooku
Udostępnij na Twitterze
Recorded at slightly below 10% over recent years, the growth rate of Polish exports topped 20% in 2021. Central Statistics Office data for the first two months of that year suggest that this positive trend has continued.
Experts believe such performance would not have been possible without industrial development. “Export expansion is tied closely to development in the processing industry, largely due to the influx of direct investments that in turn mainly involve the construction of manufacturing plants in Poland to support assorted sectors, such as automotive, household appliances, consumer electronics, machines and devices,” explains Piotr Bielski, director of the Economic Analysis Department at Santander Bank Poland. Bielski further remarked that over the past two decades, Poland has consolidated its position as “Europe’s manufacturing centre”: we have been able to attract investors owing to our convenient geographical location, competitive labour costs, and large numbers of highly-qualified human resources.
Reklama
The share of foreign equity in Polish exports amounts to 50-55%, reaching over 80% and approximately 40% in the automotive and furniture manufacturing industries, respectively.
“Over the past 30 years, Polish businesses have been going from strength to strength on successive exports markets,” says deputy director of the Centre for Exports at the Polish Investment and Trade Agency Łukasz Grabowski. He further emphasises that while we do owe our knowhow and technology transfer to foreign corporations doing business in Poland, they are not the only ones responsible for exports. Grabowski asserts that the growing commodity and service export offer is the outcome of multiple domestic companies having developed appropriate competencies, and a financial support structure allowing for foreign expansion.
Reklama
In recent years, the Polish export dynamic has remained under the significant influence of wooden furniture and other wooden products, office and printing supplies, food products, light industry commodities, mineral products, and metals and metal goods. Poland has also profited from having specialised in manufacturing automotive parts (electromobility-related in particular) and durable consumer goods, such as TV sets and household appliances.
Head of the World Economy Team at the Polish Economic Institute Marek Wąsiński further points to the share of food and agricultural products in exports (over 10%). Sector analyst at Santander Bank Poland Grzegorz Rykaczewski emphasises that current export data will be affected by two opposing factors. On the one hand, supply may be limited due to higher domestic demand, boosted by millions of Ukrainian refugees. On the other, food products are considerably more expensive than one year ago, affecting the value of sales abroad.
Analysts are consistent in accentuating that the strength of the Polish economy lies in its diversity, allowing us to handle crisis moments - such as the pandemic or war in Ukraine - effectively, and turning us into the driving force behind industrial growth, together with the entire Central European region. This diversity also boosts the labour market. “Over the past 20 years, Poland has been a leader among EU Member States in terms of reducing unemployment rates,” Wąsiński declares.
>> Special edition: World economic forum Davos 2022 << 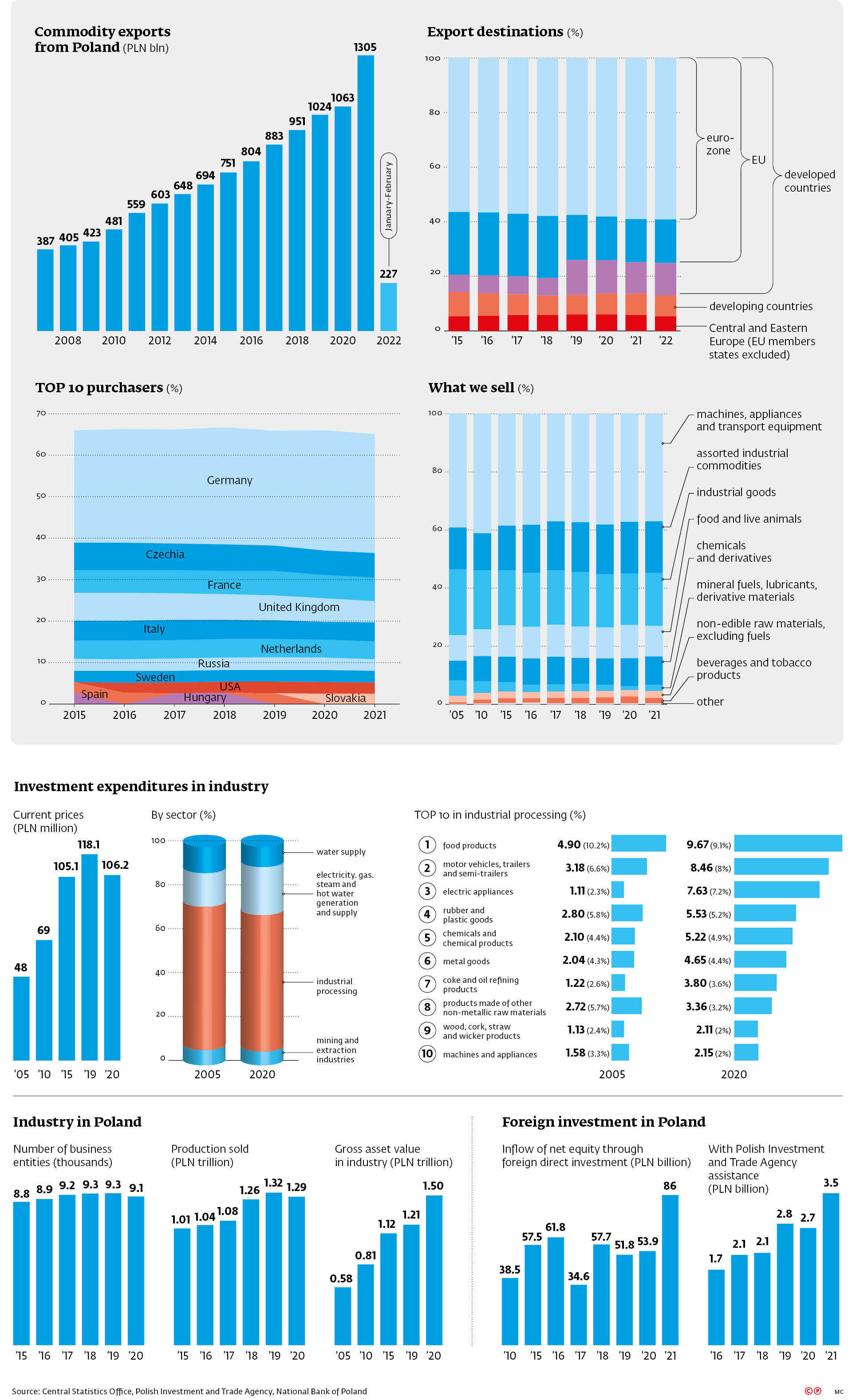