Reklama
Reklama
Reklama
Reklama
Udostępnij na Facebooku
Udostępnij na Twitterze
Poland is by no means impervious to the gas crisis, and will to a certain extent be affected by gas shortages across the continent. Yet despite relics of the past and former interdependencies associated i.a. with its position as a transit country, Poland is much better prepared for the European Union’s fuel-related divorce with Russia than many other states.
We are more than ready for the Russian raw materials embargo, and can walk away from them starting today”. Poles have been hearing such assurances repeatedly from the prime minister, other ministers, and heads of the largest companies. Having joined forces with allied Baltic States on a European Union level, Warsaw has also been among the most avid advocates of such sanctions, which are unquestionably the most painful for the Kremlin. This is why Mateusz Morawiecki’s government remained unruffled by Gazprom’s decision. In late April, the Russian company announced that in view of the refusal to accept Moscow’s newly tabled payment system, Poland (and Bulgaria) would be cut off from contracted gas supplies. The decision was made despite a fact that all experts unanimously agree on: “blue fuel” is the most difficult energy resource for Europe to replace.
Reklama
Is this an example of how security and politics trump the economy in times of war? This may be answered in the affirmative, at least in part. Pursuant to an index designed and introduced by the European Commission, over the past 20 years Poland has increased its energy dependence by a magnitude of four, with “energy dependence” defined as the significance of the share of imports in covering energy demand. Even the most basic import-related data suggests that while Russia’s general importance as a supplier is on the decline for the entire country and individual companies, when it comes to two key areas - oil and gas - Poland imports most of its resources from the East.
Reklama
A far greater scale of dependence was showcased in an analysis by Bruegel, a Brussels-based think-tank. Accounting for gas purchased by Poland i.a. as part of reverse supplies from Germany, Bruegel has estimated that Russian resources represent over 80% of our imports overall. For the sake of comparison, the share of Russian supplies in an identical combination for Germany - one of the main challengers of the highly restrictive EU sanctions concerning Russian resources - reaches no more than 54%.
Notwithstanding the above, not only did Warsaw remain unperturbed by the loss of Gazprom supplies - some representatives of the ruling Law and Justice party have gone so far as to refer to the decision as a “moral victory” of their own, the final step in efforts to liberate the country from Muscovite dominance. “This day will go down in history. Poland independent from Russian gas. This puts an end to Moscow’s blackmail”, said Beata Mazurek, a Member of the European Parliament for Law and Justice. Meanwhile, Poles in Brussels have continued to call for further sanctions, which would ultimate include “blue fuel”, and appeal to partners to refuse any demands to convert to roubles - thus facing the “loss” of “indirect” supplies from the East as well.
Yet Poland is much better prepared for the European Union’s fuel-related divorce from Russia than many other states thanks to a multiannual policy which had afforded Warsaw the option to decide (already three years ago) against extending the long-term contract with Gazprom, due to expire this year. The policy rests upon the main pillar of a decade-long infrastructure offensive: successive investments enabling gas resources supplied from alternative locations - including the lead gas terminal in Świnoujście undergoing continuous expansion - to be increased by nearly 17 billion cubic metres, had been in progress since 2011. And that pillar does not include the 2022 plans to launch a flagship diversification project connecting Poland to Norwegian Baltic Pipe deposits. The Lithuanian interconnection, active since May, is the final and already completed piece of the expansion puzzle, considerably increasing our capacity to secure liquefied fuel - to nearly 2 billion cubic metres per annum - from the Lithuanian gas port in Klaipeda (prior to the investment, our only option was to bring in gas by road tankers). According to information provided by the Polish Oil and Gas Company (PGNiG), the country’s leading gas corporation, Poland has already entered into long-term LNG contracts for 12 billion cubic metres of fuel. Furthermore, the Polish raw material storage inventory, one of the largest in the European Union, can cover approximately two months of demand if required.
The share of gas in Poland’s national energy consumption balance, relatively insignificant in comparison to other European Union Member States, has proven to be a major advantage in energy security terms. While the demand for “blue fuel” is growing (an increase of approximately 35% has been recorded over 10 years), Poland’s dependence on gas according to Bruegel continues to remain below 13%, roughly half of what is required by Germany or Austria (25 and 27%, respectively) and nearly three times that of Slovakia, Italy or Hungary (33 and 37 and 37% each, respectively).
Recent corrections to Poland’s transformation seem to be intended to preserve this profile and avoid the “gas trap”. In late March, the government approved updated assumptions for the principal document outlining the energy policy until the year 2040. These include a review of planned gas generation capacity investments in view of changes to the geopolitical situation and poor predictability on the world market. At the same time, steps have been taken to foster the importance of renewable energy sources (“Such energy solutions will let us become independent of Russian oil, Russian gas,” said Prime Minister Morawiecki), and modernise coal-fired plants as the main stabilising reserve for the RES-based system.
>> Special edition: World economic forum Davos 2022 << 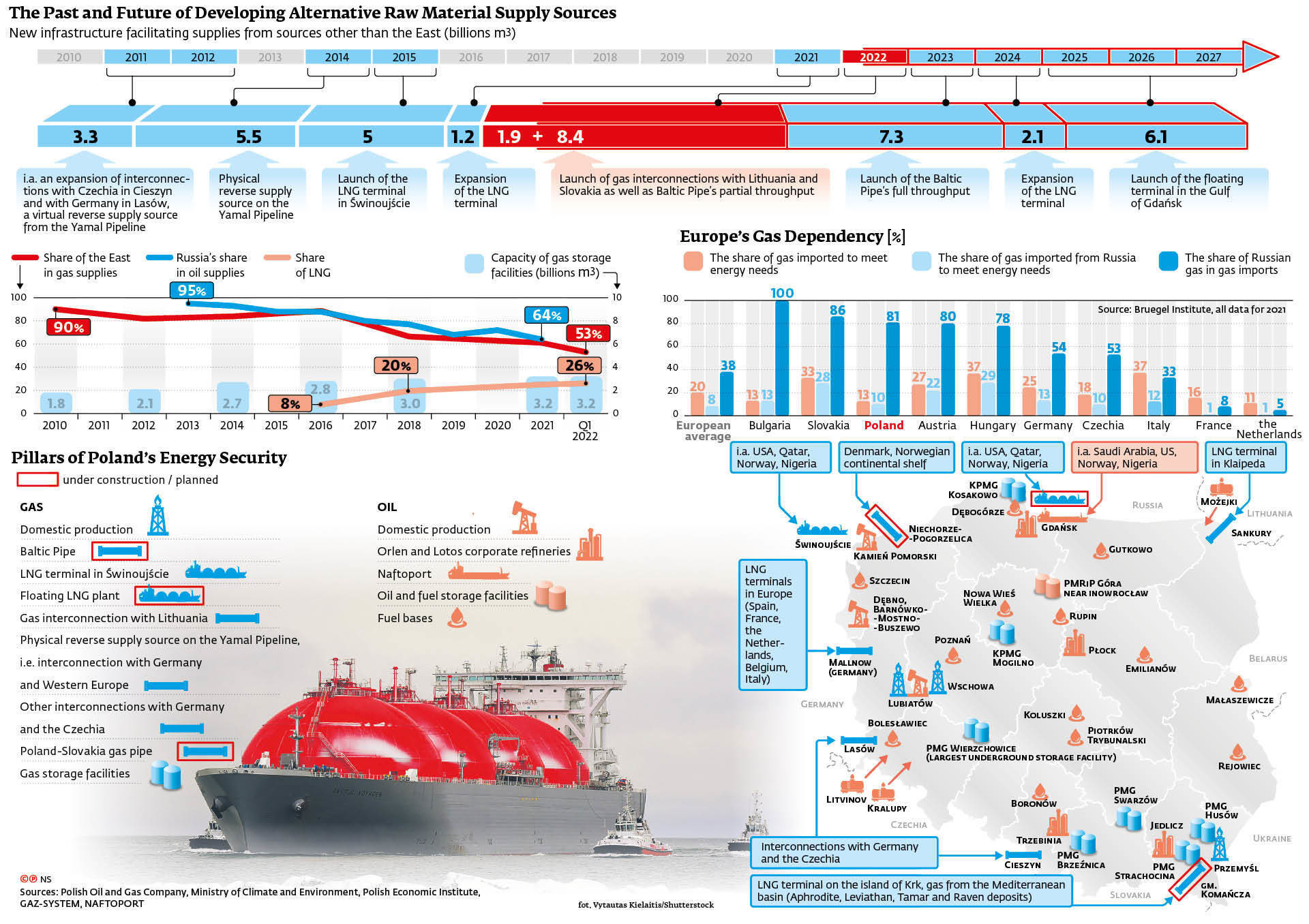